In this age of modern warfare, the children of this age may think that Bibi Mariam Cannon is just a huge piece of iron. But once this cannon was a big surprise. This cannon is a part of the glorious history of Dhaka for four hundred years. Also the cannon conveys the memory of Mir Joomla and the skill of the cannon makers of Dhaka. The cannon was a treasure of pride and love of the people of Dhaka. It is rare in history for a city dweller to have such a passion for a cannon.

When the Emperor Jahangir established the capital of Bengal in Dhaka city in the 17th century, several cannons were created to strengthen the defense system of Dhaka. Among them, “Kale Khan Zamzam” and “Bibi Mariam” became famous in the whole of India for their large size, style and beauty.

When the “Kale Khan” drowned into the Buriganga River, the Bibi Mariam became the only spectacular. It is 11 feet in length, and the diameter of the barrel is 6 inches. Janardhan Karmokar, a cannon-making manufacturer of Dhaka, made the cannon with very hard-hitting iron.

Subadar Mir Joomla (1660-1663) used 675 cannons during the Assam expedition in 1661, of which Bibi Mariam was the largest. As a commemoration of the victory of the war, he placed Bibi Mariam at Swarighat, south of Borho Katara. Then the cannon turned to be known as Mir Joomla Cannon.

In 1840, the then Dhaka Magistrate Walters established it at Chawkbazar, Dhaka. Later in 1925, Bibi Mariam was installed at Sadarghat. In the middle of the last century Bibi Mariam was brought from Sadarghat and set up in Gulistan, the center of Dhaka, for the decoration of the city. Again in 1983, Bibi Mariam was lifted from the Gulistan intersection and placed behind the main gate of the Osmani Garden. 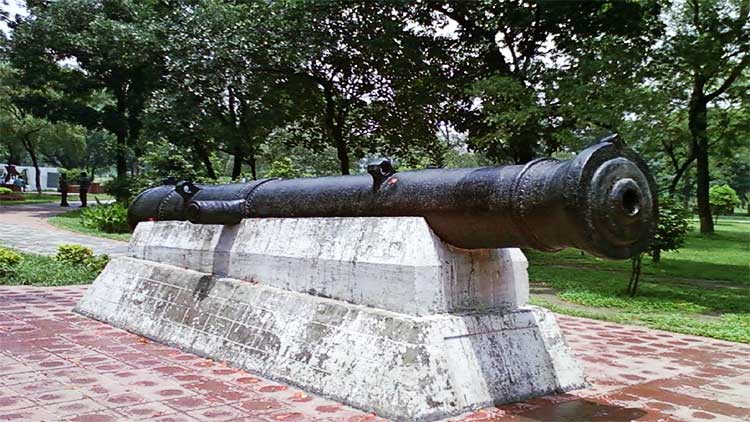 FacebookTweetLinkedInShares62
Was this article helpful?
YesNo