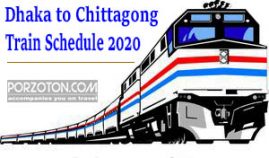 When you’re in Chittagong, you may wish to travel to Cox’s Bazar to get a touch of the sea. This is a complete guide for Cox’s Bazar trip: Cox’s Bazar Sea Beach.

Subarna Express (Train No. 701/702) is a non-stop intercity train of Bangladesh Railway. It runs from Kamalapur Railway Station in Dhaka to Chittagong Railway Station.

Subarna Express Train is the first non-stop intercity train in Bangladesh. It does not stop anywhere on its 346 km long journey except Dhaka Airport Station.

Sonar Bangla Express (Train No. 787−788) is one of the 3 non-stop intercity trains in Bangladesh. It runs between Chittagong Railway Station and Kamalapur Railway Station in Dhaka.

Schedule: Sonar Bangla Express intercity train leaves Dhaka’s Kamalapur railway station at 07:00 AM for Chittagong and reaches its destination at 12:15 PM. On the contrary, it leaves Chittagong at 05:00 PM and reaches Dhaka at 10:10 PM.

Turna Express (Train No. 741/742) is a high speed luxury intercity train on the Dhaka to Chittagong route of Bangladesh Railway. Turna is ideal for you if you like to travel at night.

Turna Express operates 7 days a week, with no off days.

Mahanagar Express (Train No. 721/722) is a luxury intercity train operated by Bangladesh Railway. The train runs from the port city of Chittagong to Dhaka, the capital of Bangladesh. The train was inaugurated on December 4, 1985.

Schedule: Mahanagar Express intercity train leaves Dhaka’s Kamalapur railway station for Chittagong at 09:20 PM and arrives at its destination at 04:50 AM. Sunday is its weekly off-day.

Mahanagar Pravati or Mahanagar Godhuli (Train No. 703/704) is one of the longest running intercity trains in Bangladesh operated by Bangladesh Railway. It runs between Chittagong Railway Station in Chittagong and Kamalapur Railway Station in Dhaka. The train goes from Chittagong to Dhaka under the name ‘Mahanagar Godhuli’ and backs from Dhaka to Chittagong with the name ‘Mahanagar Pravati’. It connects Feni, Comilla, Brahmanbaria and Kishoreganj districts. The train was inaugurated in 1986.

Schedule: Mahanagar Pravati intercity train leaves Dhaka’s Kamalapur railway station at 07:45 AM and reaches Chittagong at 02:50 PM. On the contrary, Mahanagar Godhuli leaves Chittagong at 03:00 PM and arrives in Dhaka at 09:15 PM. It has no off day.

Note: In addition to the five intercity trains mentioned, three more mail trains run on the Dhaka to Chittagong route. These are: Chittagong Mail, Karnaphuli Express and Chattala Express.

Dhaka to Chittagong railway is one of the longest route in Bangladesh. This 346 km long route has many railway stations and stoppages in midway, big and small. If you want to know in detail about each stop and turn of Dhaka to Chittagong train route map, you can download and view the following PDF file:

But if we state shortly, there are a total of 10 notable train stoppages from your initial station of Dhaka Kamalapur Station up to the destination station of Chittagong. They are as follows:

In the meantime, you know that there are a total of 8 trains available for you to travel from the capital Dhaka to the port city of Chittagong. Which of these trains you should actually choose depends on which train schedule is convenient for your travel time. So, here we will present the details on Dhaka to Chittagong train schedule, so that you can match the train with the right time for you. However, it is important to keep an eye on the off-days of the trains. Because not all trains run every day. For example, Subarna Express of Dhaka-Chittagong route will not run on Friday, Mohanagar Provati is closed on Sunday, and Saturday is the off-day for Sonar Bangla Express.

Note that, the information presented here about Dhaka to Chittagong train schedule and ticket price has been collected from the official website of Bangladesh Railway Department run under the Ministry of Railway and Bangladesh Railway Authority. The concerned authorities reserve the right to make any change in train schedule and ticket price of all trains operated in Bangladesh at any time. When they make any changes, we will immediately update the information provided here.

If you are being treated unfairly or harassed while traveling on any train in any part of Bangladesh, you can complain directly to the hotline number 131 of the Ministry of Railways.

Let’s take a look at the detailed schedule of trains running on Dhaka to Chittagong route.

So far we got detailed about the Train Schedule Dhaka to Chittagong. Now is the time to find out about train ticket prices for Dhaka to Chittagong route. Different types of trains run in Bangladesh, you know. And It’s interesting to note that all trains have the same ticket price even including both intercity and mail trains. So there is no hassle in this case. But there are many classes in seat for passengers and the ticket price for all classes of seats is not the same.

The good news for those who like to travel by train in Bangladesh is that now you can easily book train tickets for your desired destination from the comfort of your own home. This is called railway e-sheba or e-ticket. The process is very simple, it takes just two minutes. You will login to e-sheba website of Bangladesh Railway using your computer or smartphone, then select your departure, destination, class and number of tickets and then submit. Your train tickets will be sent to your email instantly.

Please have a look at this quick guideline for details of how to buy train ticket online:

Have a Nice Train Journey!

Please Feel free to contact us if you have any further question about this schedule and price list. Click here to know about train schedule of other destinations in Bangladesh. Thank you so much for spending some time with us.

If you would like learn about your return trip, please have a look at Chittagong to Dhaka train schedule.

Have a nice journey!

Dhaka to Chittagong train in a video

Porzoton is a Bangladesh-based travel website that provides you with information about places to visit in Asia and the rest of the world, and likes to encourage and assist you in travel. We try to give you a moderate idea of where and ​​how to go, where to stay and what to eat, and to show you images and videos of the places you would travel to so that you can make a good plan for your next trip. However, in addition to this practical information, we’ve tried to shed light on the importance and context of the historical and archaeological architectures of Bangladesh and beyond.

Was this article helpful?
YesNo

Scroll to Top
Share this ArticleLike this article? Email it to a friend!
Email sent!