Shat Gombuj Mosque (sixty dome mosque) is the biggest mosque and the foremost spectacular Muslim monument of the ancient sultanate era within the whole of the Himalayan subcontinent. Historians estimate that Khan Jahan Ali—the famous Sufi and conqueror of the southern part of Bengal—built the mosque in the fifteenth century. The saint khan Jahan administered the realm till 1459 when he passed away, seated at Haveli-Khalifabad, which is known today as Bagerhat and belongs to Khulna division of Bangladesh. 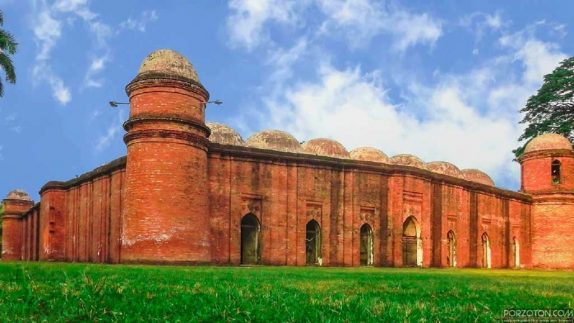 These ancient mosques, including Shat Gombuj, have made Bagerhat one of the three World Heritage Sites in Bangladesh. 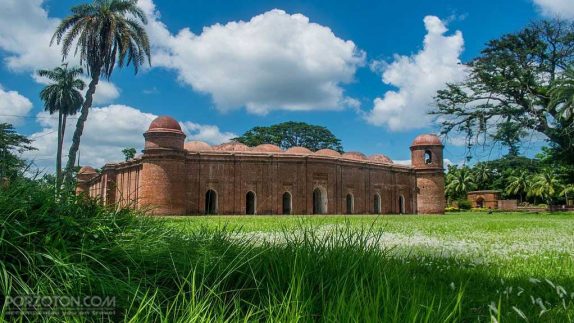 Although the name of the mosque is Shat Gombuj (60-domed), the number of domes is 77. Among them, 70 are rounded. But the seven domes in the row between the door to the east and the Mihrab to the west are very similar to the roof of the chau-chala (a hut with a roof having four distinct parts) in Bangladesh. In addition to the aforementioned 77 domes, there are four domes on top of four minarets. Therefore, the total number of domes stands at 81. So why is the name of this mosque Shat Gombuj (60-domed)? Historians think that the mosque was named at first Saat Gombuj (seven-domed) because it has seven rows of domes, and later changed the pronunciation by Shat Gombuj (sixty-domed). Many historians also think that the mosque was named after Shat Gombuj (sixty-domed) because they are built on a total of sixty stony pillars. 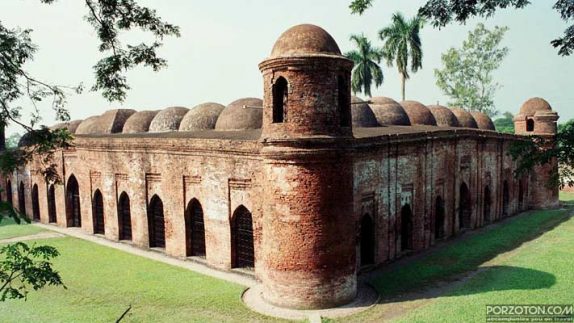 Shat Gombuj mosque in Bagerhat is the best architectural work by Sufi Sultan Khan Jahan. With four huge towers at the four corners and seventy-seven domes on the roof, the mosque looks very scenic and attractive. From the architectural point of view, the mosque continued the tradition of construction of building-style that had already begun in Bengal and contributed to the development of some of the new features taken from local and outside. The corner towers are built like defense towers. They are gradually narrowed to the up, with a round cupola adorning the top. The two-story tower, which rises above the ceiling, is probably influenced by the Khirki of Tughlaq (c. 1375) and Kalan Masjid (1380) of Delhi. It is noteworthy that the spherical feature of the corner tower is different from the other buildings of Khan Jahani style of Khalifatabad.

Shat Gombuj Mosque combines the Arab-Islamic tradition and the construction style of traditional Bengal. Its central huge nave, as well as the adjacent structure, was first seen in Bengal at the Adina Mosque (1375). This style is probably adopted from the Jami’ Masjid (705-715) in Damascus. And the Chauchala arch system on the central nave could be procured from the Chauchala hut type of rural Bengal. Although this tradition was absent in Bengal architecture till then, it was later observed in Chotta Sona Masjid (1493-1519) and Lattan Masjid in Gaur (early 16th century).

The seemingly triangular pediment on the eastern central entrance is probably taken from the triangular gable of the du-chala hut of Bengal. Likewise, the floral niche design on the outskirts of Shat Gombuj Mosque has probably been imitated by the wooden and fence designs of the huts of Bengal.

Another important feature of this mosque is the small entrance gate adjacent to the central Mihrab. It is found in some mosques in northern India but is obsolete in Bengal. This genre may come from ancient Muslim architecture. In the early Muslim architecture, the entrance adjacent to the mosque’s Mihrab was used by the Caliph, the governor or the Imam. So, it’s possible that this route was used by Khan Jahan, ruler of the Khalifatabad, whose residence was located a short distance to the north of the mosque.

How to go to Shat Gombuj Mosque

Shat Gombuj Masjid (sixty dome mosque) is just 7 km from Bagerhat city. It is located in the village of Sundarghona, next to the Shat Gombuj Bus Stops of Khulna-Bagerhat highway.

You can go directly from Dhaka to Bagerhat. Many buses including Meghna, Banaful, Tourist, Falguni, Ara, Baleshwar, Hamim and Dola leave from Saidabad in Dhaka from 6 am to 10 am and from 7 pm to 10 pm daily. Besides, Sohag, Shakura, Hanif and Eagle depart from the Gabtali bus stand. The rent is BDT 400. The journey takes about 7-8 hours.

Shat Gombuj Mosque is seven kilometers from Bagerhat bus stand. The rickshaw fares are 30-40 taka (BDT) and the autorickshaw fare is 100 taka. 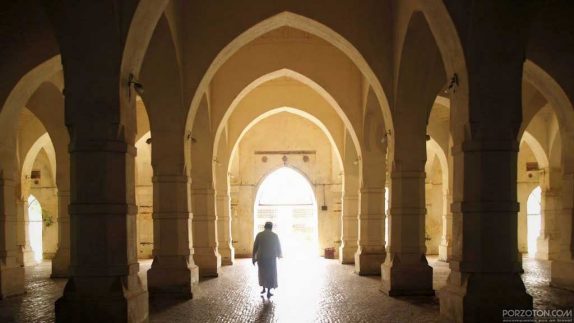 Inside Shat Gombuj mosque, there are two brick-built platforms. Of these, the platform near the central Mihrab was probably built by Khan Jahan for administrative use. And the other platform near the eastern gate was used by religious leaders to spread the message of Islam among the people or students. Therefore, it appears that Shat Gombuj Mosque was used for three purposes: for Islamic meetings, as a traditional parliament building like the ancient Muslim world, and as a mosque-based Madrasah.

There are stairs with two front-side minarets, through which Muazzin climbed up and proclaimed Azan. One of the rooms at the top of the tower is named Rowshan (lightened) Kotha, and the other named Andhar (dark) Kotha. Inside the mosque there are 60 pillars. They are arranged in rows from north to south. There are 10 pillars in each row. They were built of huge stones, 5 pillars in the middle covered with brick on the outside. The domes are built on top of these 60 pillars and on the walls that surround it. 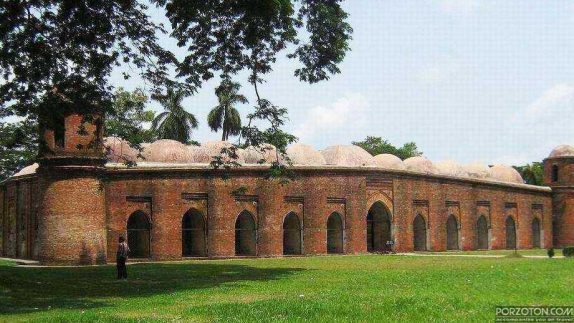 Ticket prices: Tickets price 20 taka per head, but children under age 5 don’t need a ticket. For the foreigners, entrance fee for Shat Gombuj Mosque is 200 taka.

FacebookTweetLinkedInShares118
Was this article helpful?
YesNo